His artwork has won 59 top tier awards and honors over the past 15 years, mainly in the genre of “plein air painting”, which has become his passion. Those include: the 24th Annual Chelsea International Juried Fine Art Competition, NYC, selected by Ira Goldberg, executive director of the Art Students’ League of NYC, an Invitation to the Florence Biennale  (2011) as one of twelve artists representing the U.S. in Florence, Italy, plus several Best of Show and First Place Awards in major national juried fine art competitions.

His favorite and most coveted award is the “Superintendent of Zion National Park Purchase Award” (2014), putting his piece in the park’s permanent collection. His most recent honor was to be sponsored and voted into the prestigious Salmagundi Club, NYC, January 2018.

His work has  been published in major art magazines and national juried publications, most recently, 3 books “Strokes of Genius 8, 9 &10” by North Light Books, 2016 - 2018. He has won Best Overall Pastel and Best Drawing in Plein Air Magazine bi-monthly salon competitions since 2016.

He loves to teach others the basics of plein air painting in pastel and is invited to do workshops all over the U.S. and in Europe.

Zion National Park has become his second painting home where he has been invited to the plein air competition, for 3 consecutive years, 2014-2016.

Zion provides the perfect venue for his strong use of color to express the unique quality of light that exists only  here.  As one NYC review stated:  “Hill’s vibrant colors run like an electric undercurrent through his works, making them tremendously exciting and fresh” . . . ArtisSpectrum Magazine, Chelsea, NYC, August 2010.

As Steven puts it “There’s simply no other pace on the planet as special to paint as Zion. I feel more alive and am better able to better express myself in the moment, anywhere and everywhere I turn in this canyon.” 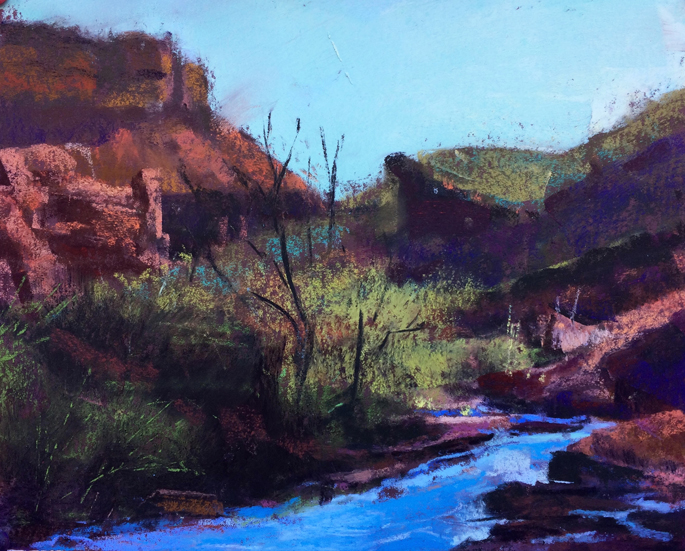