Every  piece is one of kind, so actual image and current stock will vary with artist’s firing schedule.  Each glaze is unique and will vary.  We are happy to hand select the perfect piece for you.

The Navajo people (who call themselves DinŽ or Dineh) have known the art of making clay pottery for many generations.  The traditional wedding vase is one of the more popular.  Coarse clay is dug from local riverbeds then mixed with other types of rock such as volcanic rock and Anasazi chips.  It is then cleaned and ground up, coiled, and shaped by hand.  After the pot has been formed, it is smoothed out on the outer surface by using a smooth rock.  Then a design is added to the exterior, if any.  Most of the dried pottery is fired in an open, wood and sheep manure fire, resulting in “fire clouds” on the pottery’s surface.  When finished firing, an application of Pinion pitch is added.  This water proofs the pot and adds a soft luster and wonderful aroma.

A week or two before the wedding, the future husband’s parents make the wedding vase. When the vase has been made, the husband, his parents, and all his relatives go to the bride’s house. Blessed water is poured into the wedding vase.  The bride drinks from one opening of the vase, turns it around clockwise, and gives it to the groom who then drinks from the opposite side of the vase.  They both cleanse each others hands with the remaining water.  This ceremony unites them in eternal love and a happy, successful, stable marriage.  The couple will treasure the vase through out their married life.  The wedding vase should always be protected. It should never be broken or destroyed. 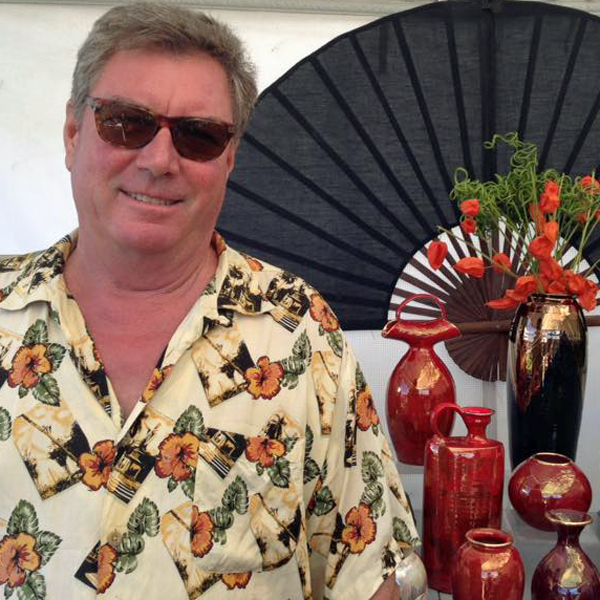 Bruce Fairman’s studio is in Sacramento, California in a flourishing artist colony. All of Bruce’s pottery is made from either porcelain or white stoneware clay, and each piece is created individually by hand on a potter’s wheel. Each shape is designed to capture both elegance and classical Oriental simplicity, while ultimately highlighting Bruce’s signature glazes.

The glazes used by Fairman he developed himself over years of trial and error, and receive their unique colors and hues from the additional minerals added to the glaze. Fairman’s work has been shown in invitational exhibitions throughout the United States, and his pieces have been featured in galleries as far away as Hong Kong.

Not only does Bruce have a thriving pottery business of his own, he works with the Khmer Artisan Project in Cambodia. This non-profit seeks to help local potters improve their craft to make their works more marketable to potential buyers. The average salary for a potter in Cambodia is less than USD$300 annually, and this program seeks to train potters to have a sustainable career and source of income.